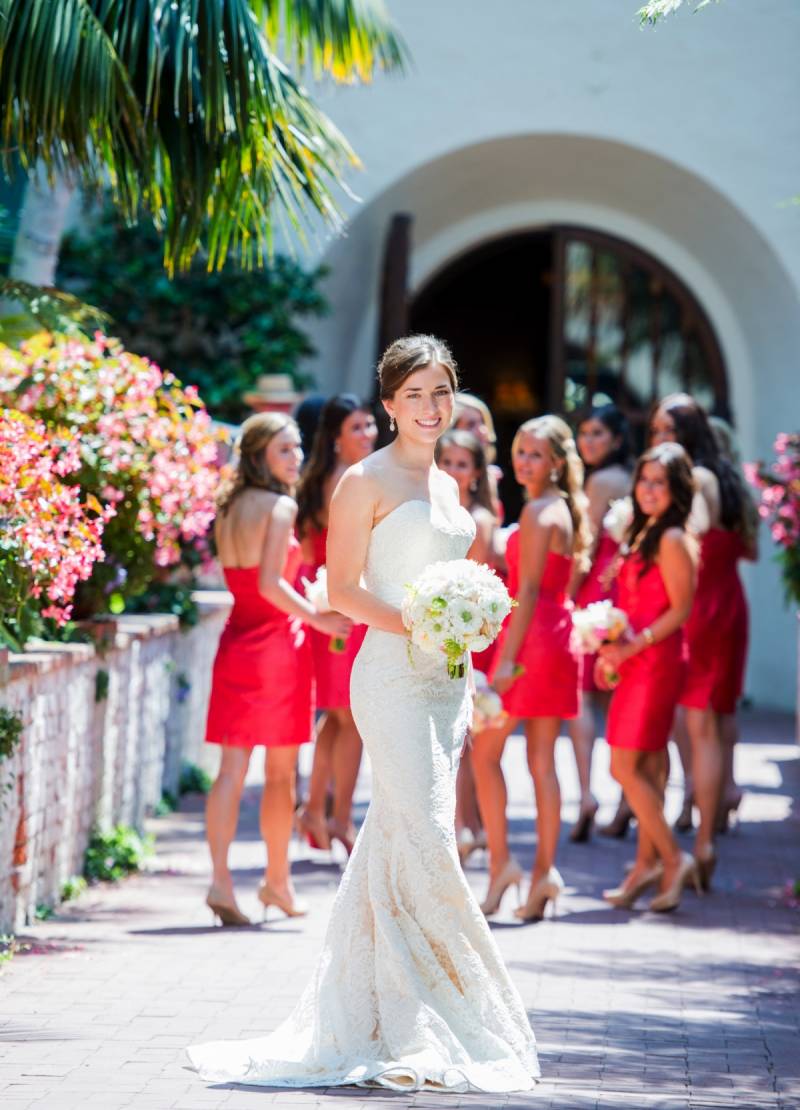 Three years prior, Ryan and Whitney met in Dallas, Texas, where he was working in the oil and gas industry and she was studying both finance and fine art at Southern Methodist University. Luckily, Whitney based her first impression of Ryan on his “good looks, intelligence and great smile,” instead of his choice in restaurants. “It’s funny because I remember telling my friends that I would never go on a date to The Porch Restaurant because they have televisions hanging in every corner,” Whitney says. “It was actually a good place for our blind date just in case we needed a distraction.” No distractions were necessary for the attractive pair who hit it off from the onset. They ordered the same item off the menu and talked late into the evening. “It felt like we had known each other forever,” Whitney says. Ryan was just as smitten and a wonderful romance began. 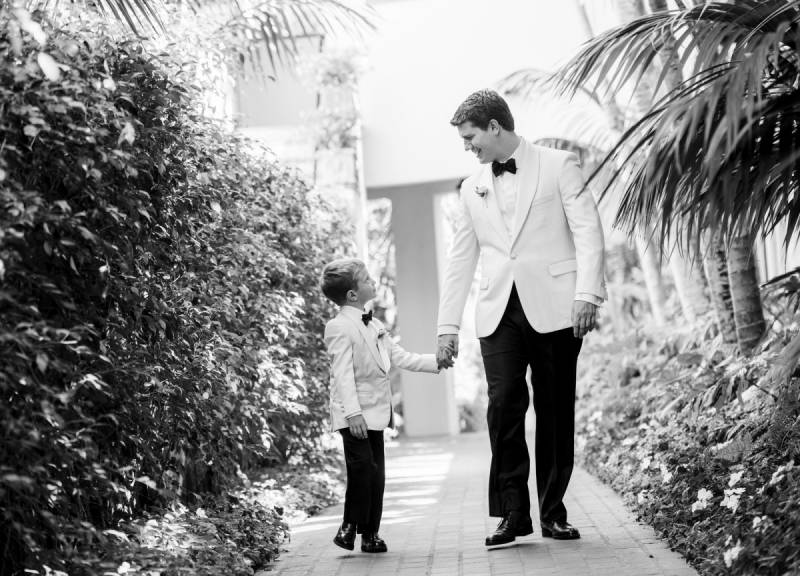 Whitney’s hometown of Pacific Palisades, California and the nearby community of Santa Barbara were the sites of the couple’s many wedding festivities. The four-day, charm-soaked celebration included a rehearsal dinner at Wine Cask Restaurant, a festive bridal luncheon at Birnam Wood Country Club, a welcome dinner at the Four Seasons Resort The Biltmore Santa Barbara and a farewell champagne brunch overlooking a polo match at the Santa Barbara Polo & Racquet Club. For the summer nuptials, a tailored invitation suite displayed the couple’s wedding motif: their shared initials as a monogram alongside two crossed polo mallets in acknowledgement of  the bride’s childhood spent around the polo field. 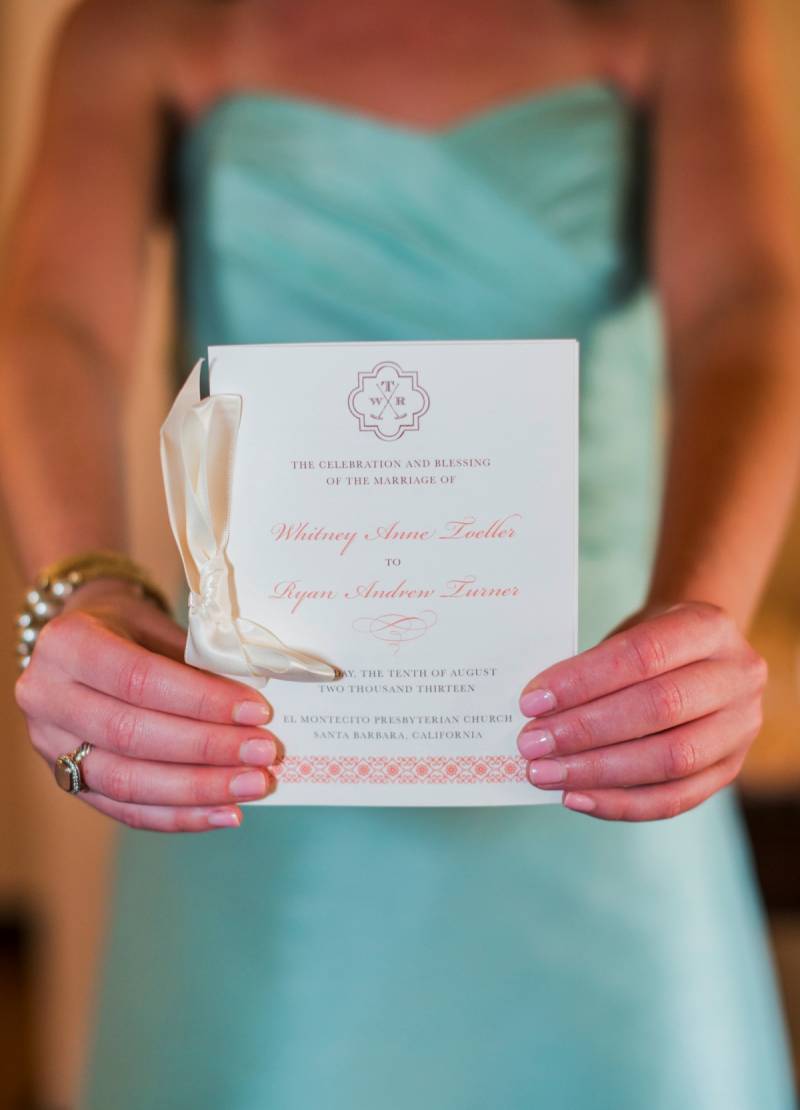 On Saturday, August 10, 2013, 260 guests gathered for the ceremony at El Montecito Presbyterian Church where Whitney attended as a child. It was important to both Ryan and Whitney that a sense of tradition and formality be infused in the day. The memorable union commenced with the sounds of the church choir and orchestra. Whitney appeared as a pretty bride holding a hand-gathered bouquet of David Austin roses, snowy jewel roses, scabiosa, peonies, ranunculuses, Eucharist lilies and maidenhair fern in the creamiest ivory hues. For her wedding day look, a lengthy dress hunt turned up two remarkably different style options. She was torn between a modern and structured Carolina Herrera gown—the unexpected choice according to the bride’s everyday fashion; or a classic Elizabeth Fillmore ivory lace dress with a feminine blush underlay. After much deliberation at Warren Barron bridal salon, Whitney opted for the latter. With her hair swept off her neck in a classic low bun, her look was at once refined and natural. A bevy of bridesmaids wore knee length coral LulaKate dresses for a simply chic look. Ryan was a handsome groom in a custom made Tom James white dinner jacket and black tuxedo pants, flanked by his ten groomsmen in matching suits. 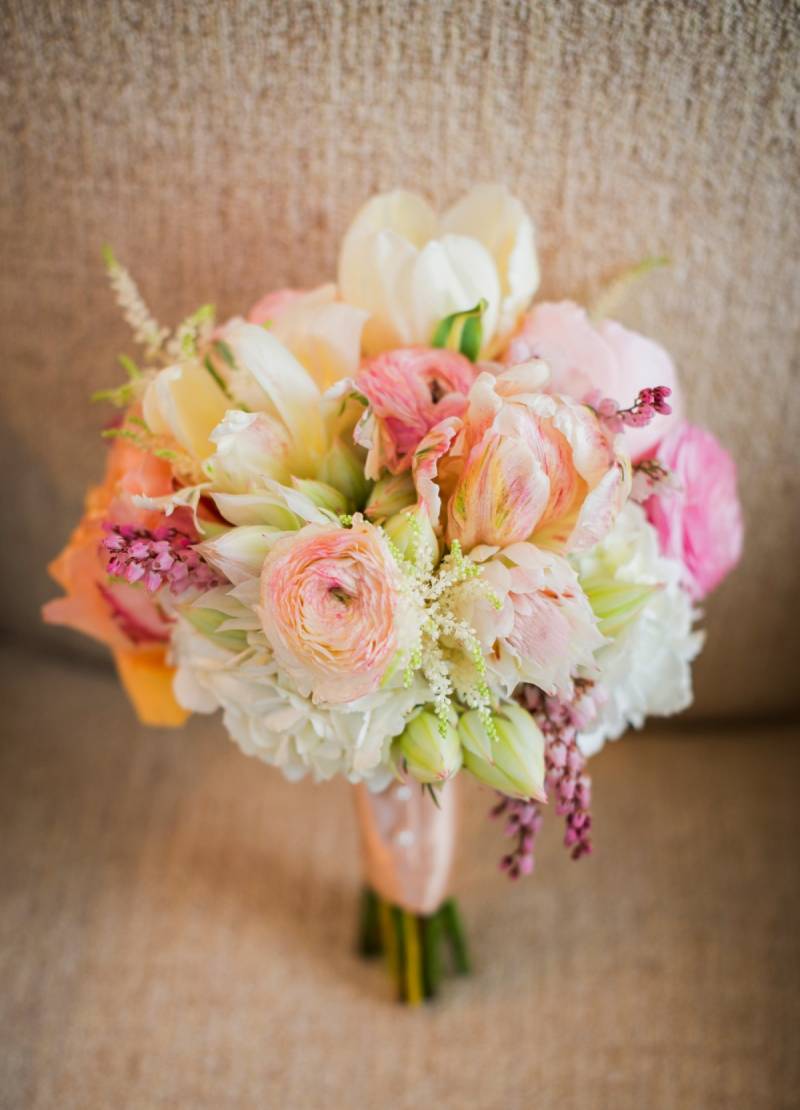 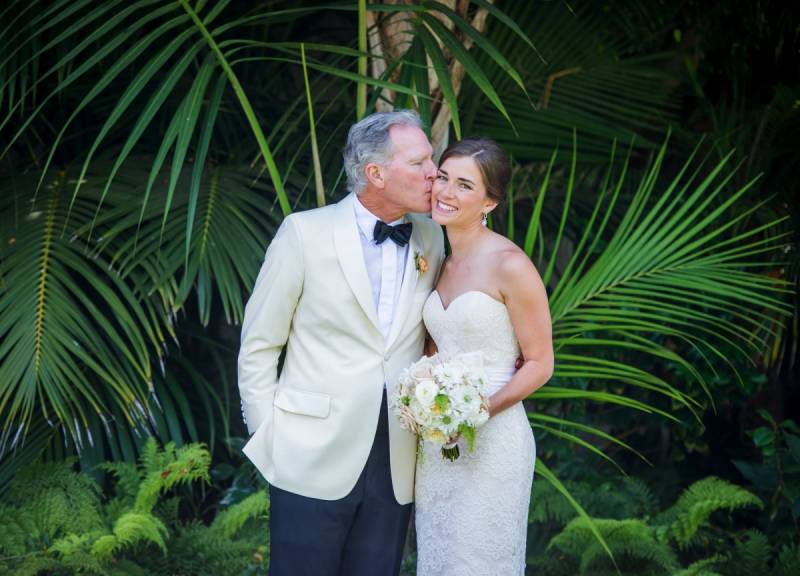 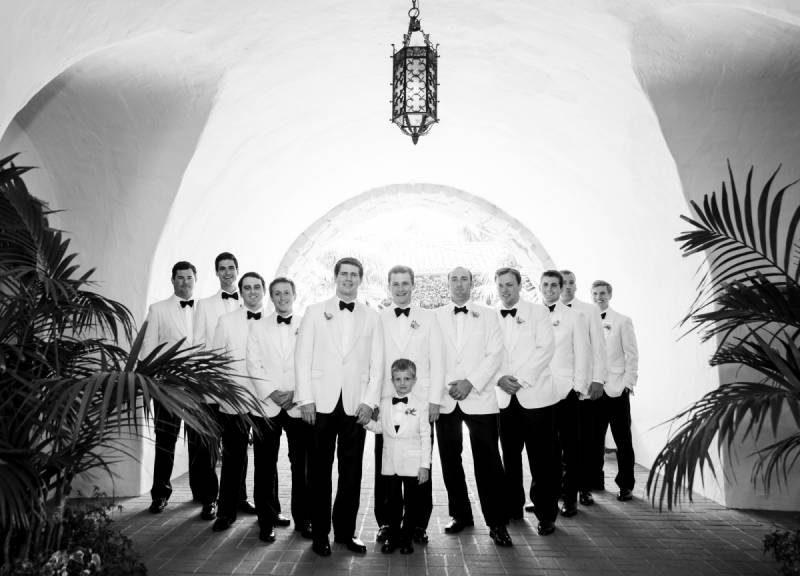 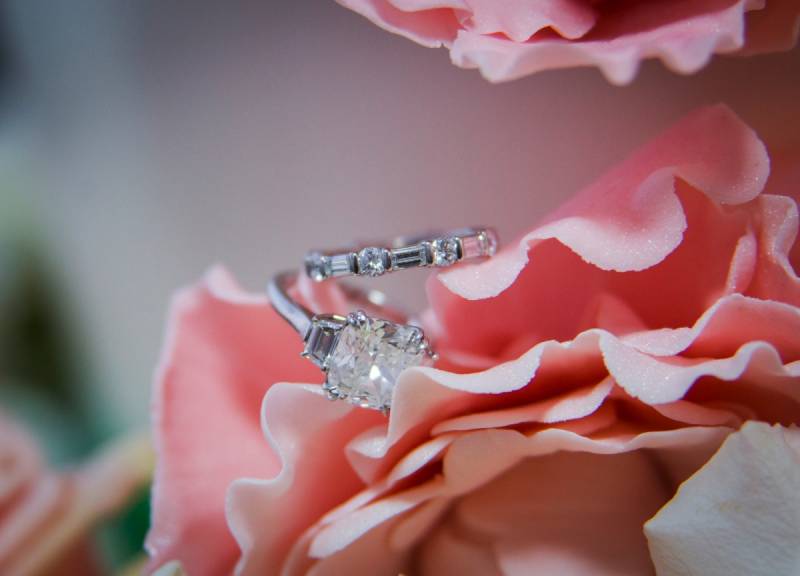 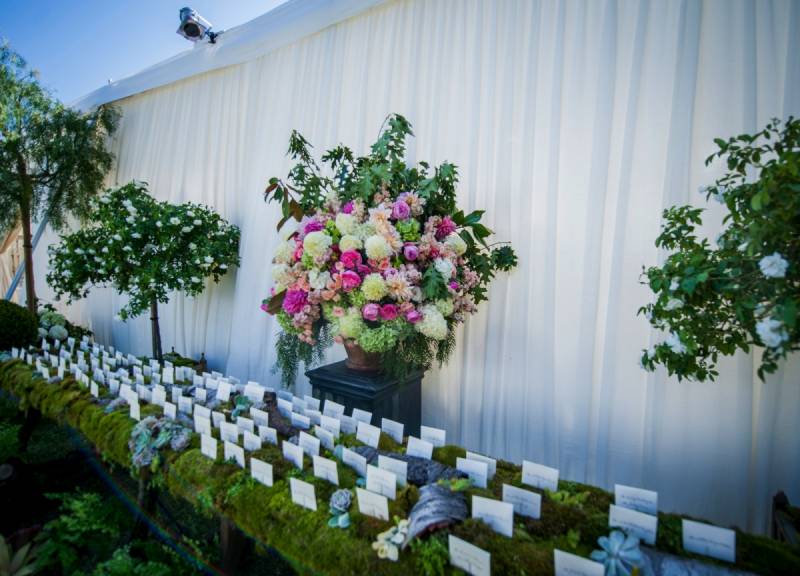 Guests mingled beneath a sailcloth tent by Town and Country Event Rentals for hors d'oeuvres, an artisanal cheese spread and classic cocktails. Potted citrus trees lined the tent for a fresh, garden party look. A reception followed on the awe-inspiring grounds of a private estate in the hills of Carpinteria with 360-degree ocean and mountain views. Once event coordinator Colette Lopez of La Fete Weddings discovered the exclusive locale, she worked with the floral team at Jackson Durham Event Design to create a chic and elegant scene on the polo field. They extended the walls of the white tent to give the open-air space a sense of grandness. The team at Revelry Event Designers created a stunning scene with fabric drapery and southern smilax-adorned wrought iron chandeliers. “We didn’t want any crystal or shine. “That just isn’t us,”  the bride says. 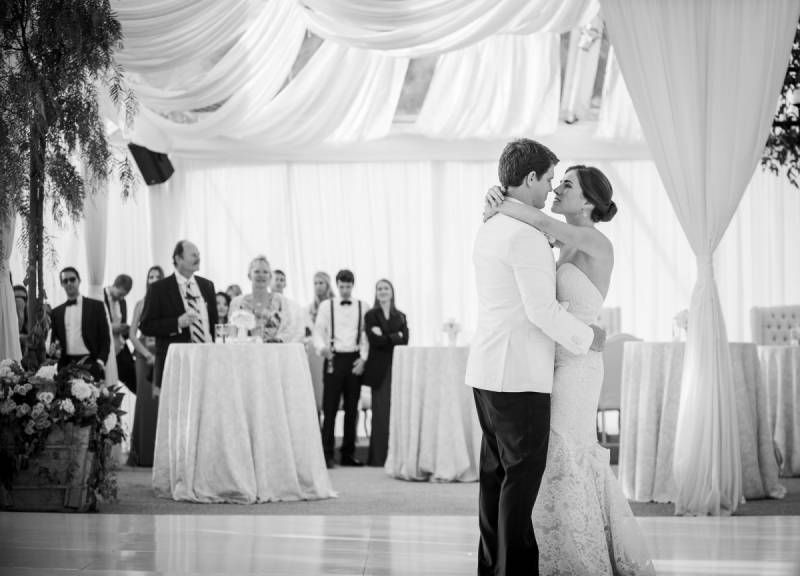 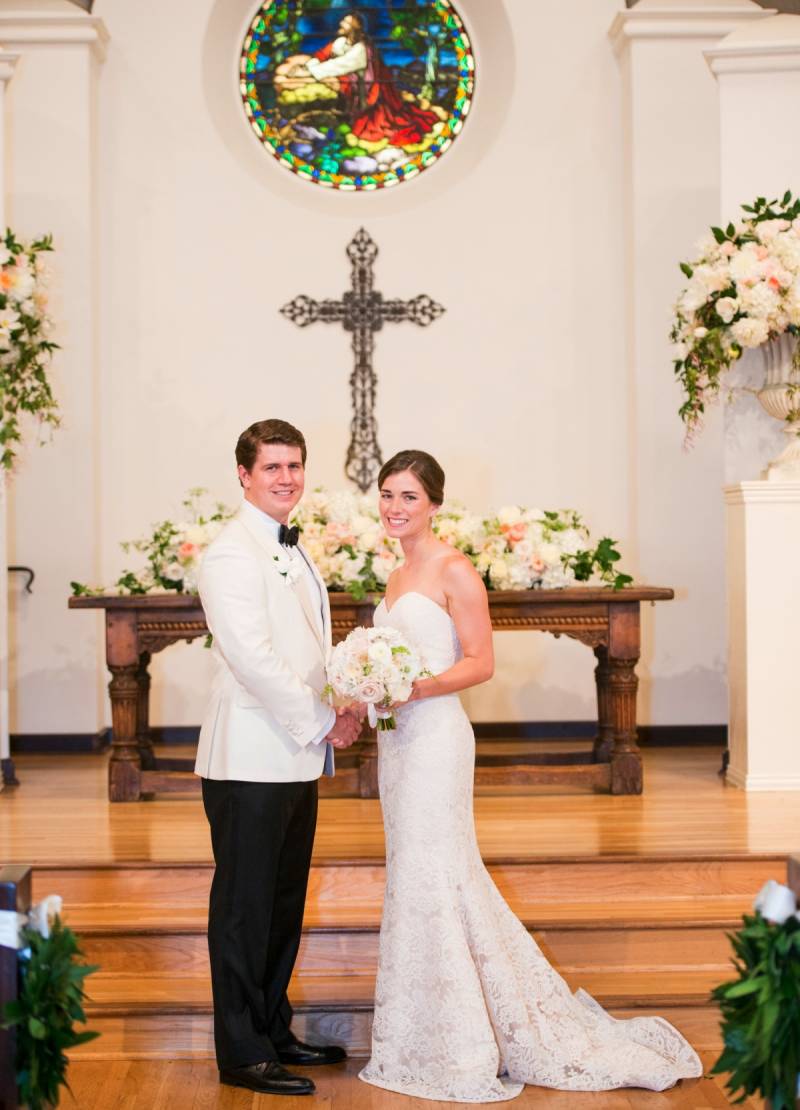 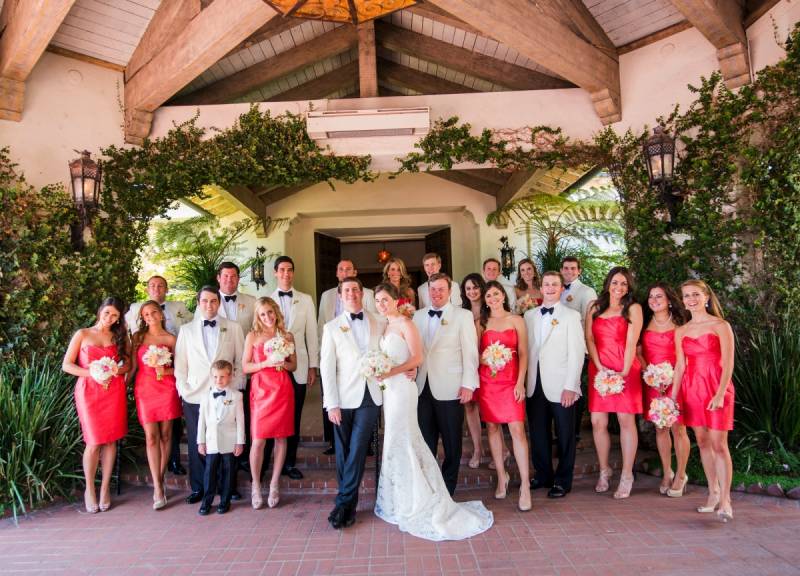 Halfway through the reception, Whitney changed into a chic J. Mendel white dress. “I was so grateful that I brought a short dress because it was such a hot evening,” Whitney says. A decadent meal by Room Forty included such favorites as corn and lobster bisque and braised short ribs. Guests were treated to a luscious four-tier German chocolate, vanilla and coconut cake by Sweet & Saucy Shop. In a cheeky nod to the groom’s profession, Whitney surprised Ryan with a carrot cake in the shape of an oil rig. 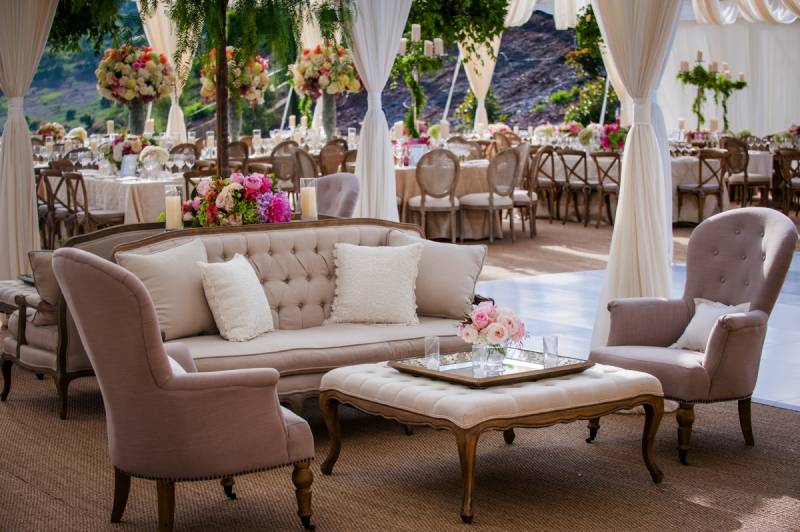 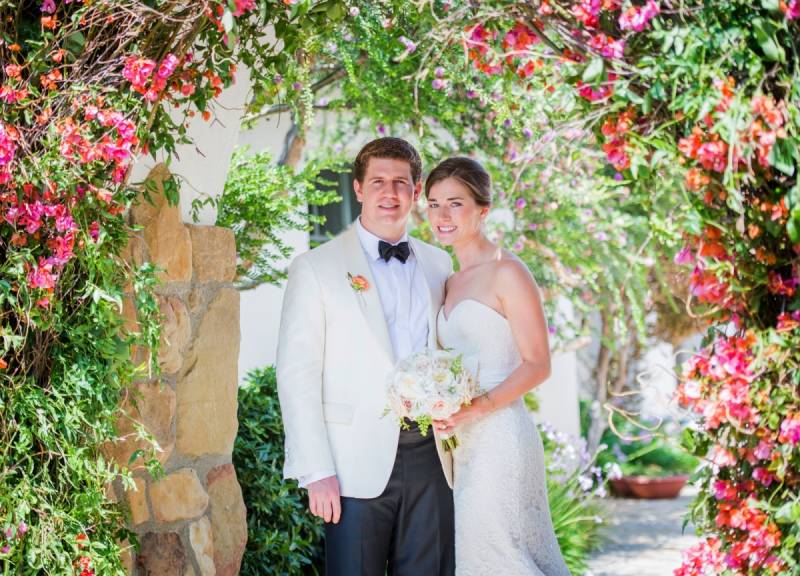 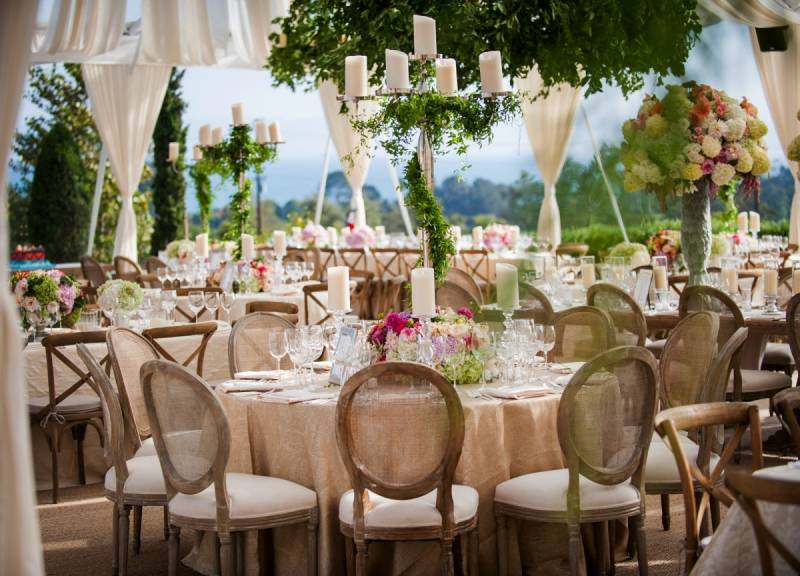 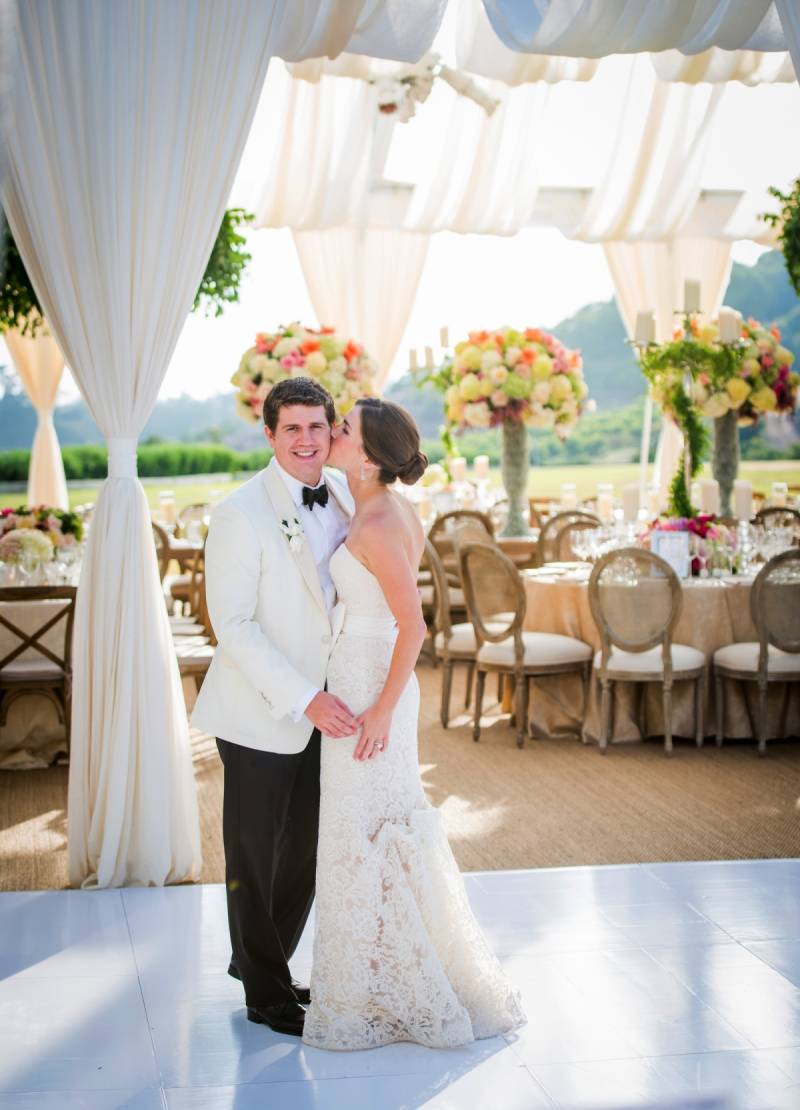 The dance area was defined by a glossy white floor with an opening in the tent overhead for stargazing. The lively reception gave way to a spirited after party in the clubhouse of the Santa Barbara Polo & Racquet Club. The swanky scene, complete with a scotch and cigar bar, was inspired by the members-only club, Annabel’s in London. The joyful revelry and dancing continued as DJ Lucy spun tunes until the early morning light. The bride says, “Everyone was on the dance floor...it was a tremendously fun night!” At weekend’s close, the new Mr. and Mrs. joined their families for dinner at El Encanto Hotel in Santa Barbara. “Even though we were exhausted, it was great to talk about the weekend and share our favorite moments,” Whitney says. For their honeymoon, the newlyweds hopped a flight to Hawaii’s Big Island for a rejuvenating week of sunshine, saltwater and lounging at The Four Seasons Resort Hualalai. 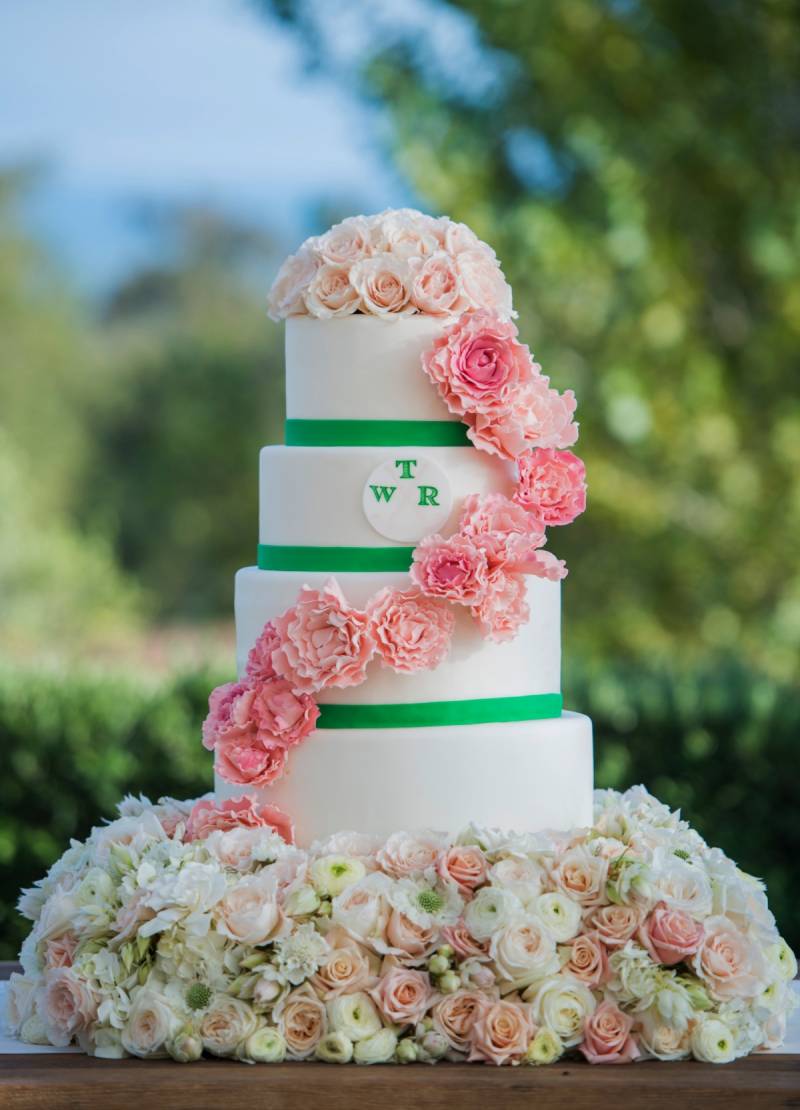 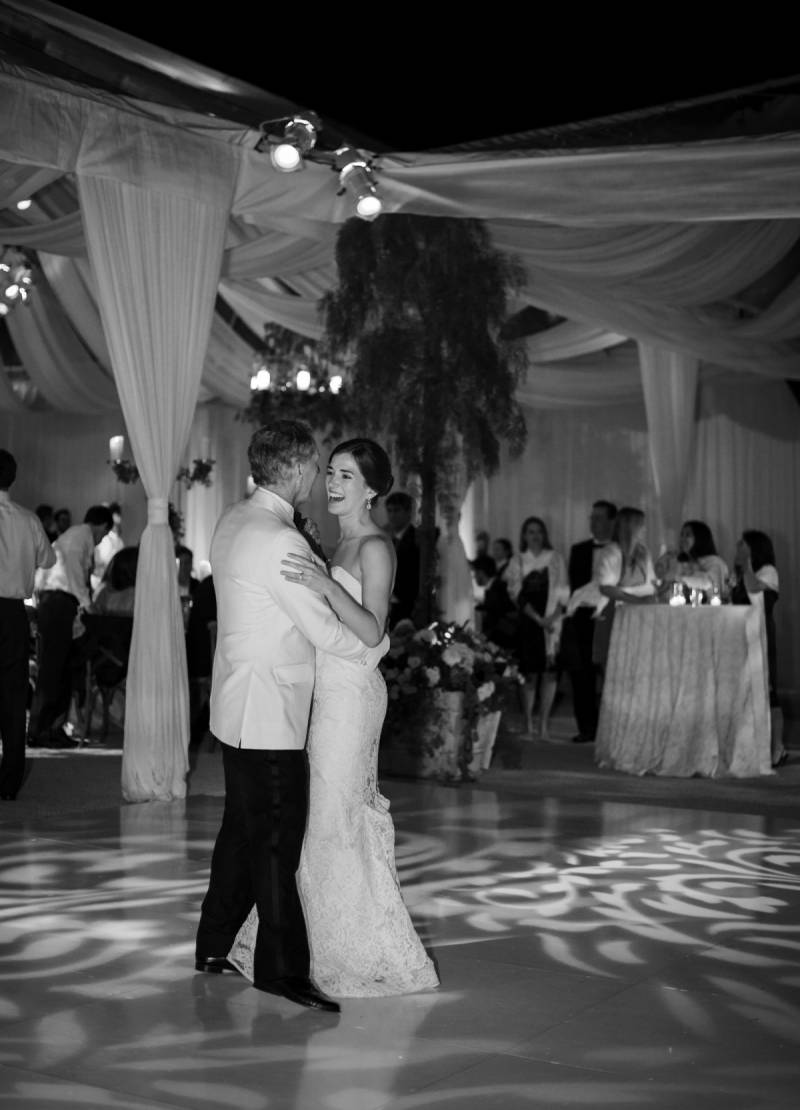 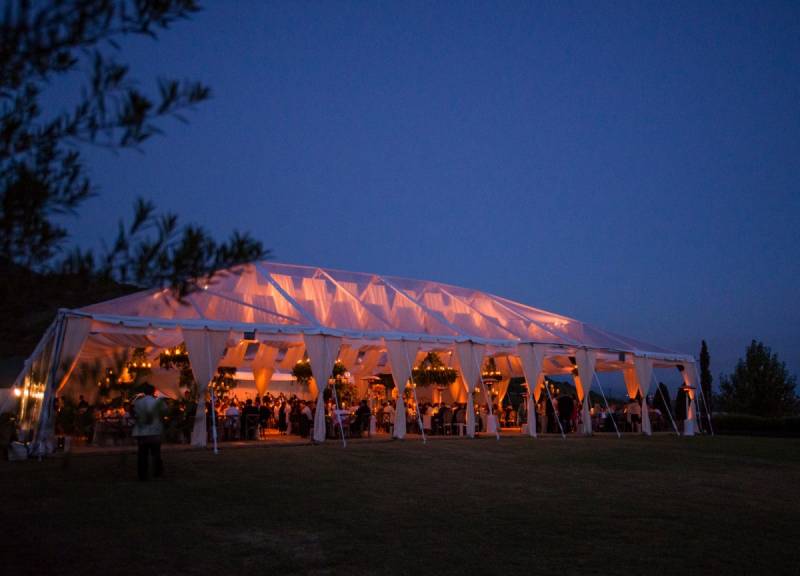