On the eve after Christmas, Conor Welch pulled his chair up to a well-worn scrabble board with an interest that far surpassed the usual agenda to win. This particular game of scrabble alongside his girlfriend Julianne Knetzger would come down to a four-letter-word and the question of a lifetime. “I slyly pocketed the L, V and E letter-pieces along with the O-shaped engagement ring that had been burning a hole in every pair of pants I put it in,” Conor says. He managed to play by the rules for well over an hour, making unsuccessful attempts to use the ring to spell that special four-letter-word. “I finally resigned to putting the ring in the bag of letters in the hopes that she would unknowingly pull it out herself,” he says. “I watched breathlessly every time she dug into that burgundy bag filled with vowels, consonants and the most important item I had ever purchased.” The anticipation was more than he could stand. “I asked Juli, quite uncharacteristically, if I could (just this once) trade in one of my letters,” he says. She lovingly obliged and Conor finally pulled out the diamond ring, placed it on the board in the vacant space between the L and the V and asked, "Will you marry me?" She happily said yes.

The Southern California couple met three years prior when mutual friends planned to set them up at a dinner party. Juli and Conor both played coy on that fateful night, pretending not to notice the other. Despite his shy demeanor at first, the film industry professional managed to invite Juli to dinner the following week and they were soon inseparable.

After their engagement, they went “full-force into wedding planning because we wanted to be married as soon as possible!” Juli says. They talked excitedly of hosting a destination wedding in Quebec, Canada—at a locale that was so dear to their families. However, once their guest list climbed toward 300 friends and extended family members, Juli and Conor began to romanticize an elopement on the majestic cliffs of Big Sur, California. “At that point, we had already sent out half of the save-the-date cards,” Juli says. “We realized that the wedding we had been planning was getting away from the true meaning for us...which was each other.” In that moment, the pair decided to host an intimate celebration in Wine Country with their immediate families in attendance. “We informed our friends in the hopes that they would understand and support our decision,” Juli says. “The love that we got back was overwhelming and amazing!”

Wine Country has been the destination of choice for travelers who love its unpretentious feel, farm- to-table approach to cuisine and picturesque vineyards that line the blue sky. Conor and Juli wanted their wedding to embody the laid-back pace of life in Sonoma County which stretches just beyond the fog that escorts those across San Francisco’s Golden Gate bridge. “Because our group was so small, we thought it would be wonderful to have a mini-vacation with our guests and Wine Country felt like the perfect place,” says the bride. When they happened upon Anderson Ranch in Kenwood, they knew they would wed beneath the grand canopy of trees. “There had only been a handful of weddings held there before ours, including the owners of the property, and that made it feel even more special,” the couple says. The Ranch was inspired by American author Jack London’s legendary Glen Ellen Wolf House and the craftsman-style lodges from the turn-of-the-century. A renovated barn fashioned from Sonoma fieldstone and old- growth redwood is the focal point of the 75-acre estate. French-country antiques dot the interiors, finely curated by a French importer of the local boutique, Chateau Sonoma.

In Wine Country, it’s easy to fall in love with the food. Julianne and Conor reveled in sharing the community’s bountiful culinary offerings and world-renowned wines with their guests. They welcomed everyone with an intimate rehearsal dinner at Estate, an Italian-inspired restaurant located in a historic Victorian building in downtown Sonoma. After dinner, the bride’s sister Kallen surprised the couple with a poignant slideshow of Juli and Conor’s most memorable times, spent side-by-side. The couple’s closest friends even recited a poem on video, sharing messages from those who could only celebrate in spirit. The evening was full of good cheer, spectacular food and emotional exchanges, a lovely prelude to the wedding celebration to come. Eschewing tradition, Julianne and Conor decided to host a Friday evening wedding to ensure a relaxed weekend spent with their company enjoying wine tastings and al fresco meals throughout the region. “Having the entire weekend to relax with one another was a special feeling that everyone felt fortunate and grateful for,” Juli says. “The positivity, love and incredible warmth shared by all was palpable throughout the weekend.”

The festivities began on a sun-filled afternoon in early summer in the outdoor courtyard, marked by abundant nature and gorgeous natural light. The couple’s mandate for their Wine Country wedding was intimate, classic and romantic. The bride says, “Our wedding theme was love— pure and simple—it’s what brought the two of us together and what keeps both of our families so close.” Event coordinator Mercedes Stonefelt of Ramekins Culinary School & Inn created an elegant and comfortable celebration in the pastoral setting. Mercedes let the Ranch’s rustic surroundings guide her understated decorating choices. The bride choose a palette beyond the pale of blush pink and ivory for an utterly romantic look. Florist Marisa Tsikounas of Michael Daigian Design dressed the long table in lush arrangements of peonies, garden roses, gardenias, dalias, snapdragons, eucalyptus and dusty miller.

The bride entered on her father’s arm, wearing a simply pretty lace Sassi Holford gown with a jewel neckline, paired with navy blue sandals to match the groom’s Ralph Lauren suit. A delicate veil placed high atop her sun-kissed hair completed her timeless look. She carried a bouquet of ivory peonies, anemones, freesia and dusty miller. As Juli walked down the aisle toward her husband- to-be she was overcome by emotion, “realizing in that moment that our love was so real and true.” Conor felt the same magnitude of love. “Not usually much of a crier, I burst into tears as soon as I saw Jules in her wedding dress walking towards me,” he recalls. “It was a perfect setting, made even more wonderful by the people closest to us in our lives.” During the heartfelt ceremony, the father-of-the-groom recited the poem "I Love You" by Roy Croft while Juli’s father shared a personal reading. “My father wrote the most beautiful words about the deep connection that Conor and I share and how it will further deepen with our marital bond,” says the bride. “We kept a copy of his reading and have yet to get through it without crying.” A champagne toast kicked off the beginning of their splendid life together as man and wife.

An authentic Wine Country dinner is a lengthy social affair, and this warm gathering followed suit. Fifteen celebrants dressed in their finery joined around a table adorned in candlelight for the celebratory feast. The menu by Ramekins Culinary School & Inn featured the seasonal flavors of Northern California: Sonoma field greens with Laura Chenel goat cheese and summer strawberries, mesquite-grilled Niman Ranch filet of beef with a merlot reduction sauce and Sonoma Muscovy duck breast with an Amarena cherry glaze. “The best part about having so few people was that everyone was able to stand up and make a toast, which were all so special and from the heart,” says the groom. Juli’s bridesmaids received delicate hammered gold stacking rings with colored gemstones to represent their unity as sisters. Conor gifted his groomsmen, Luke and Michael, matching ties from Vineyard Vines for their ceremony attire, as well as silver belt buckles engraved with their initials. As a grand finale to a fabulous evening, a trio of white cakes with pastry cream and mixed berries was served to all. Photographer Scott Andrew Shoemake recalls the evening, “The closeness, the emotion and the pure love that was displayed by both families before, during and after Juli and Conor’s ceremony was simply a breath of fresh air. Every word had meaning and every person was thrilled for them. It was inspiring to say the least.” 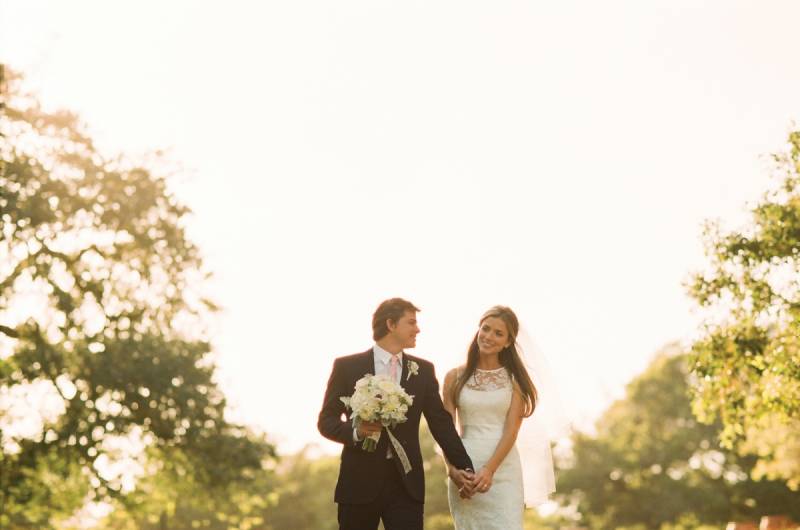 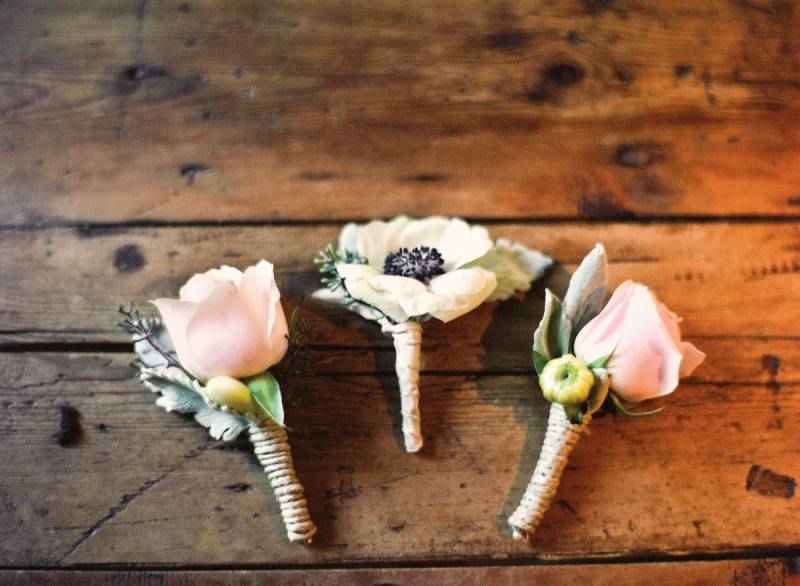 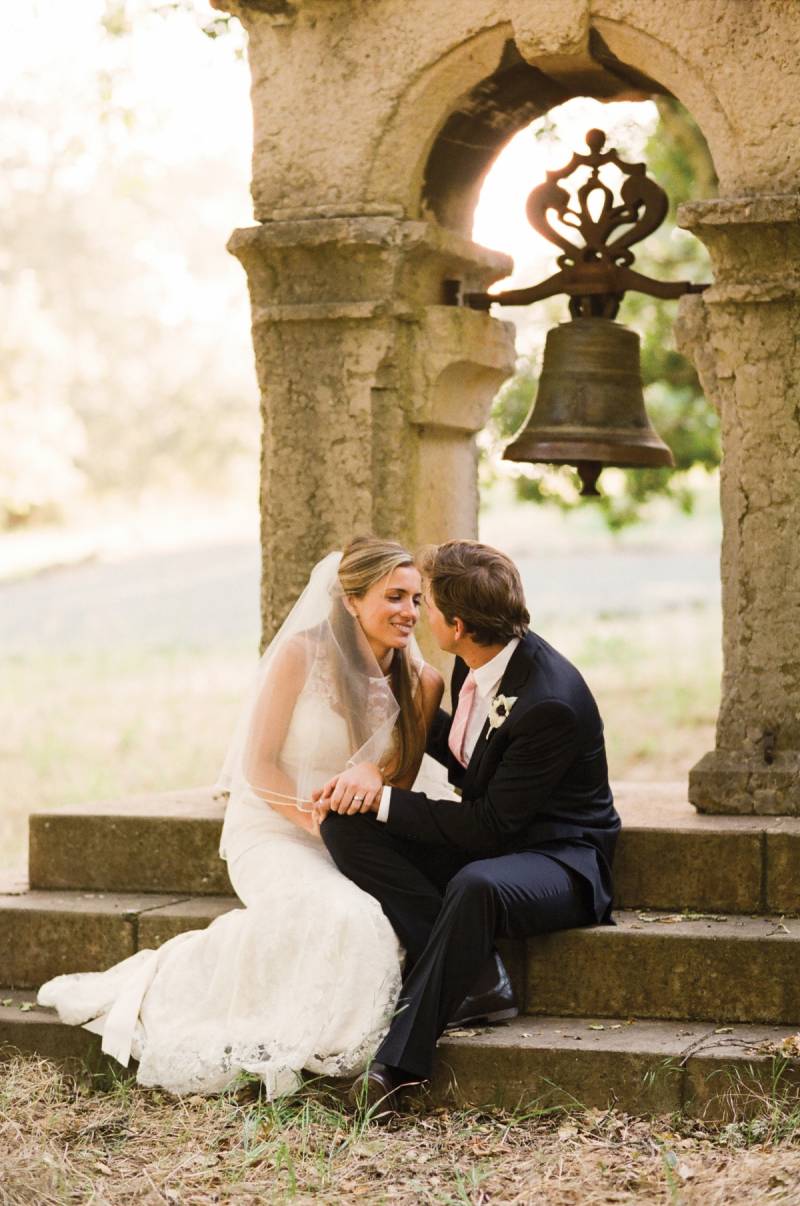 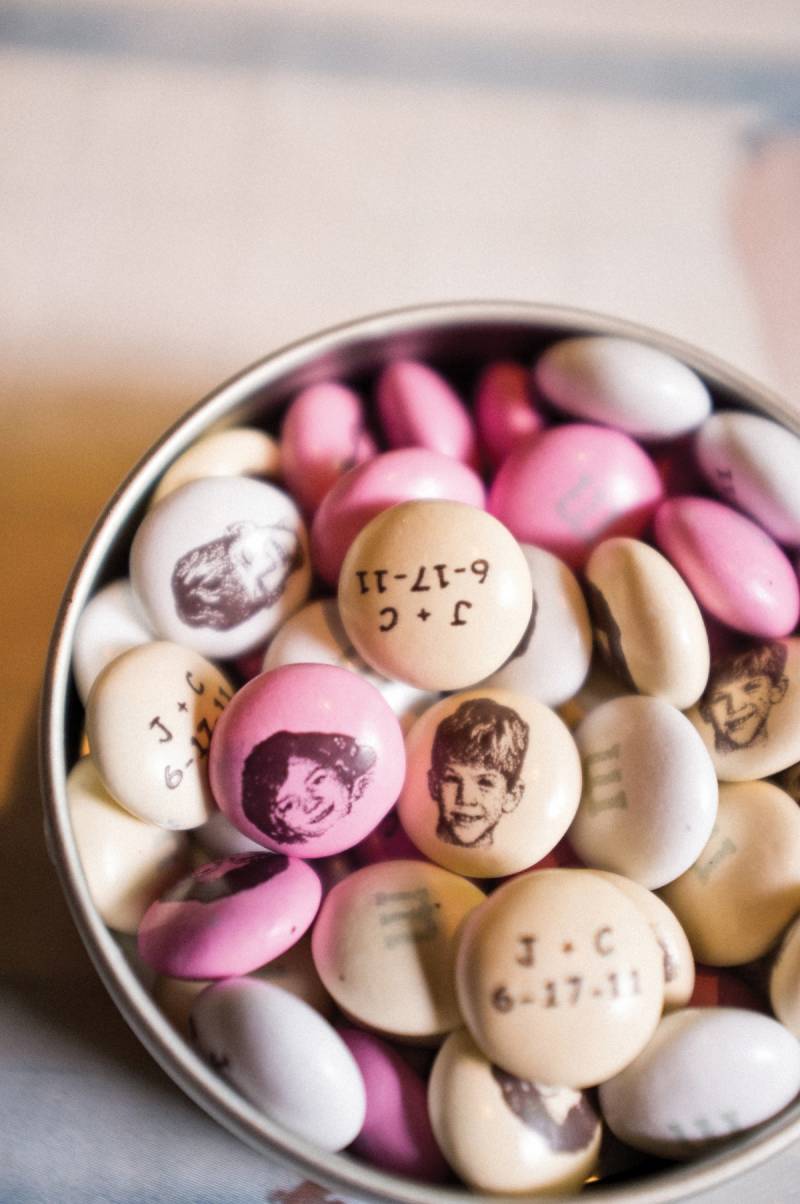 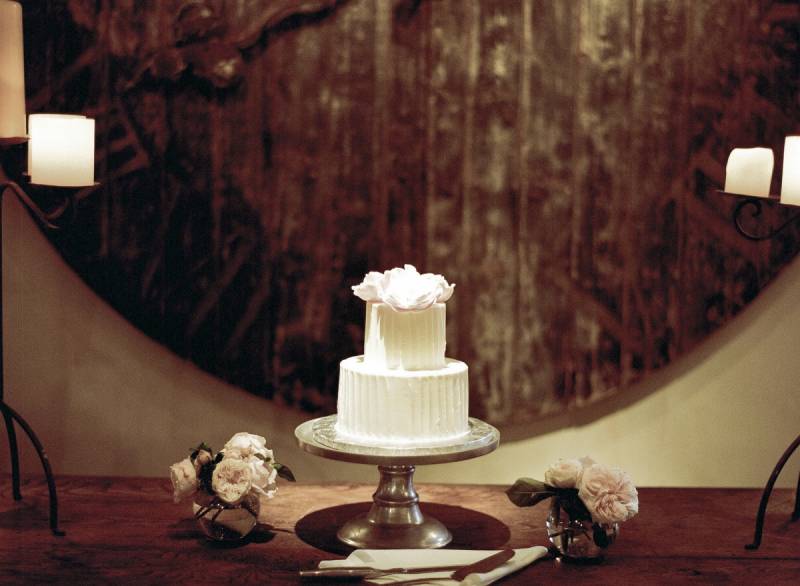 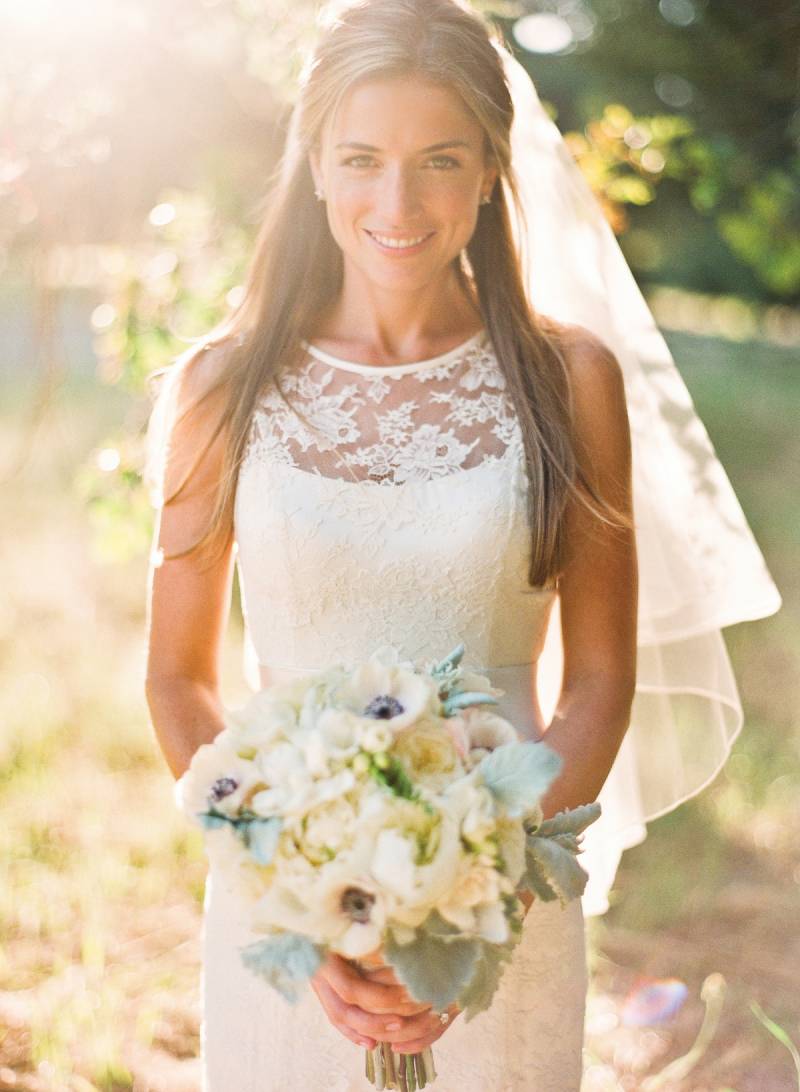 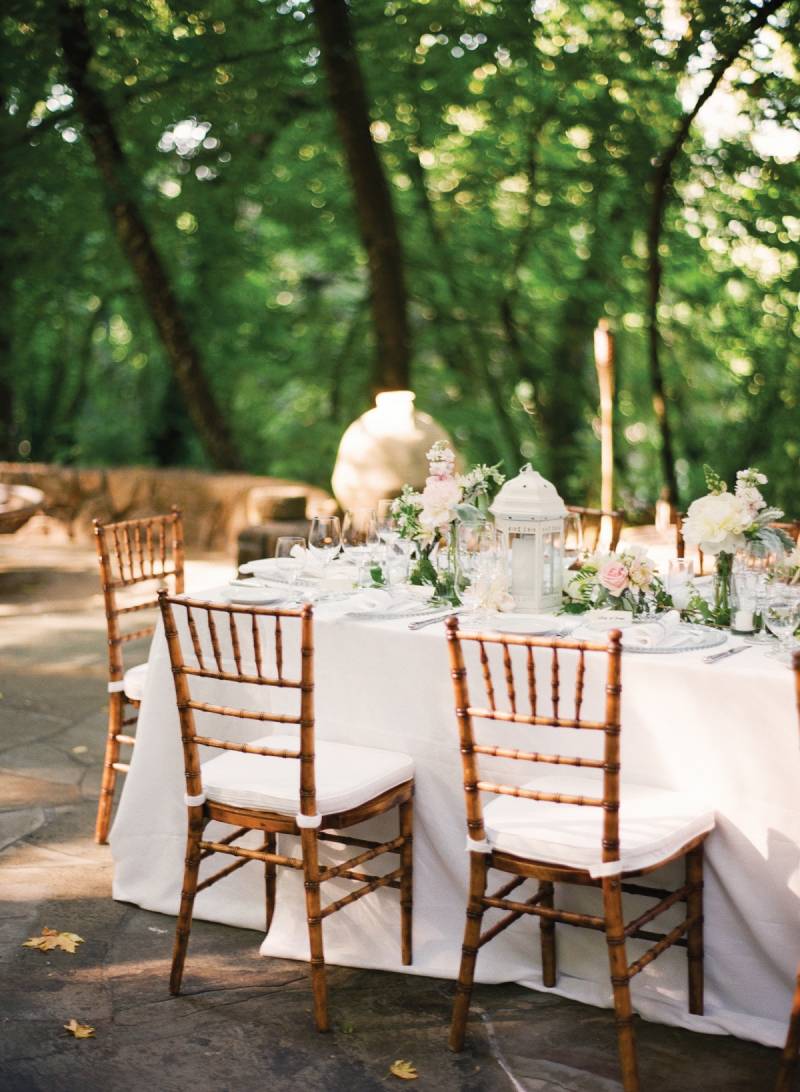 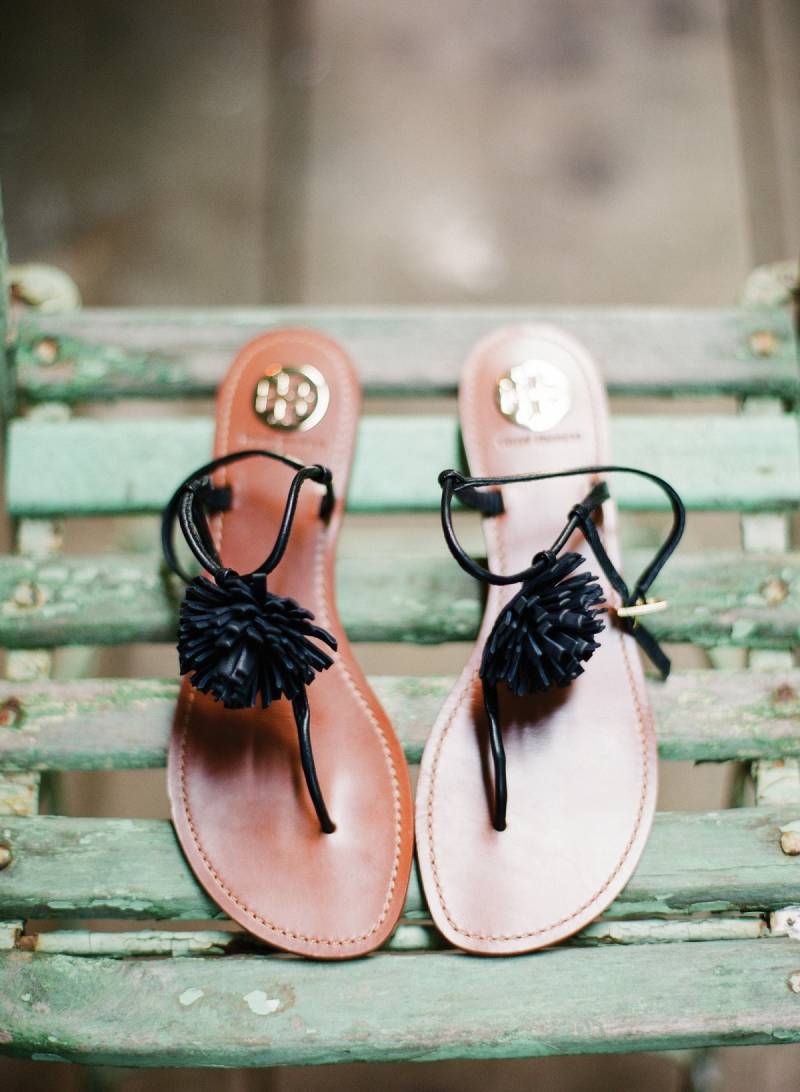 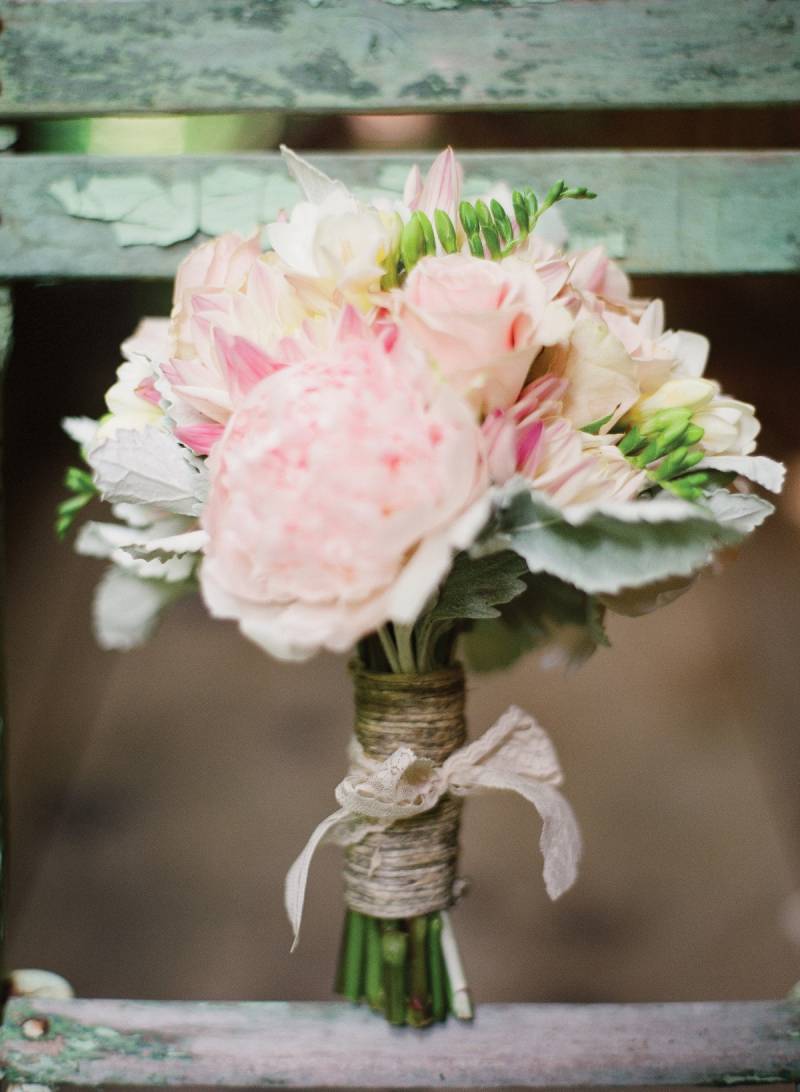 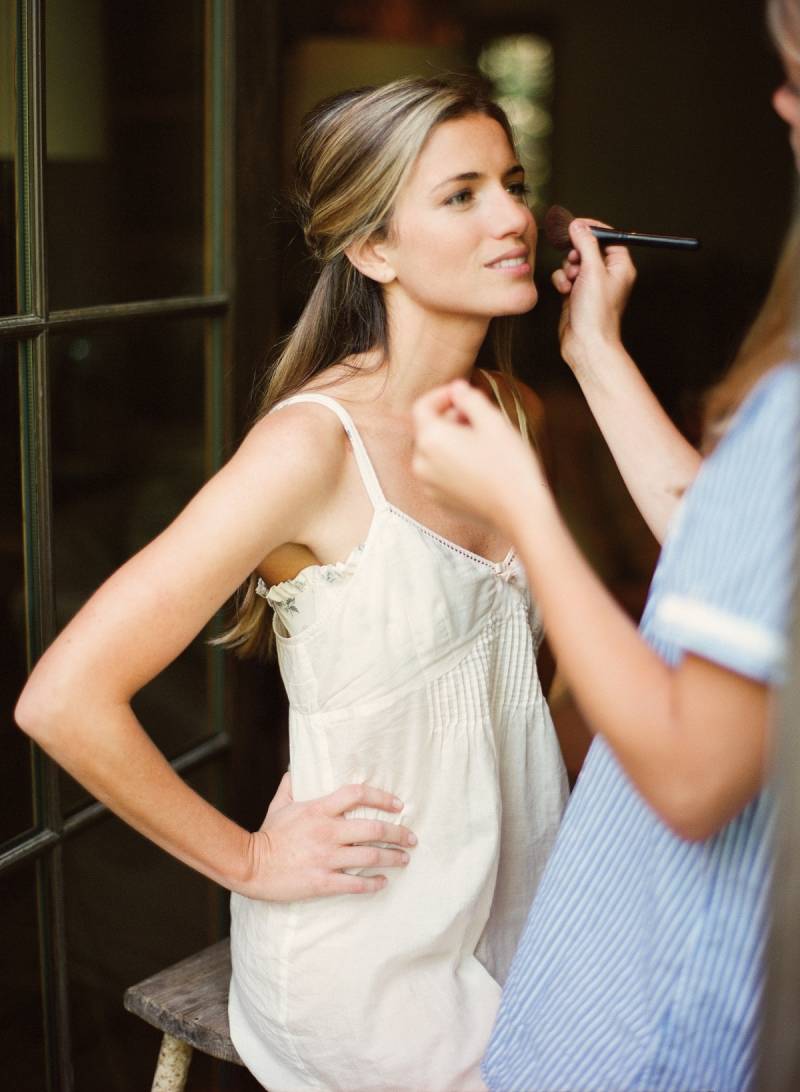 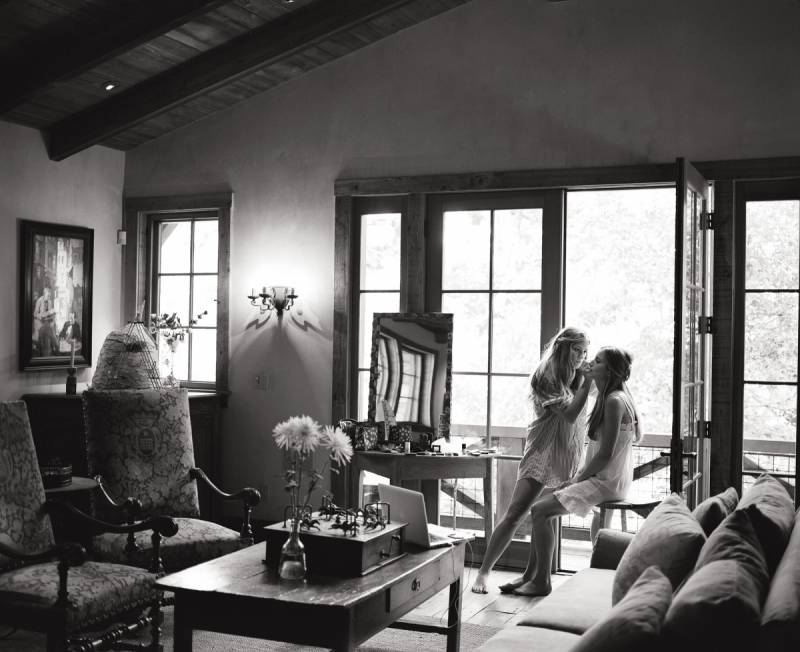 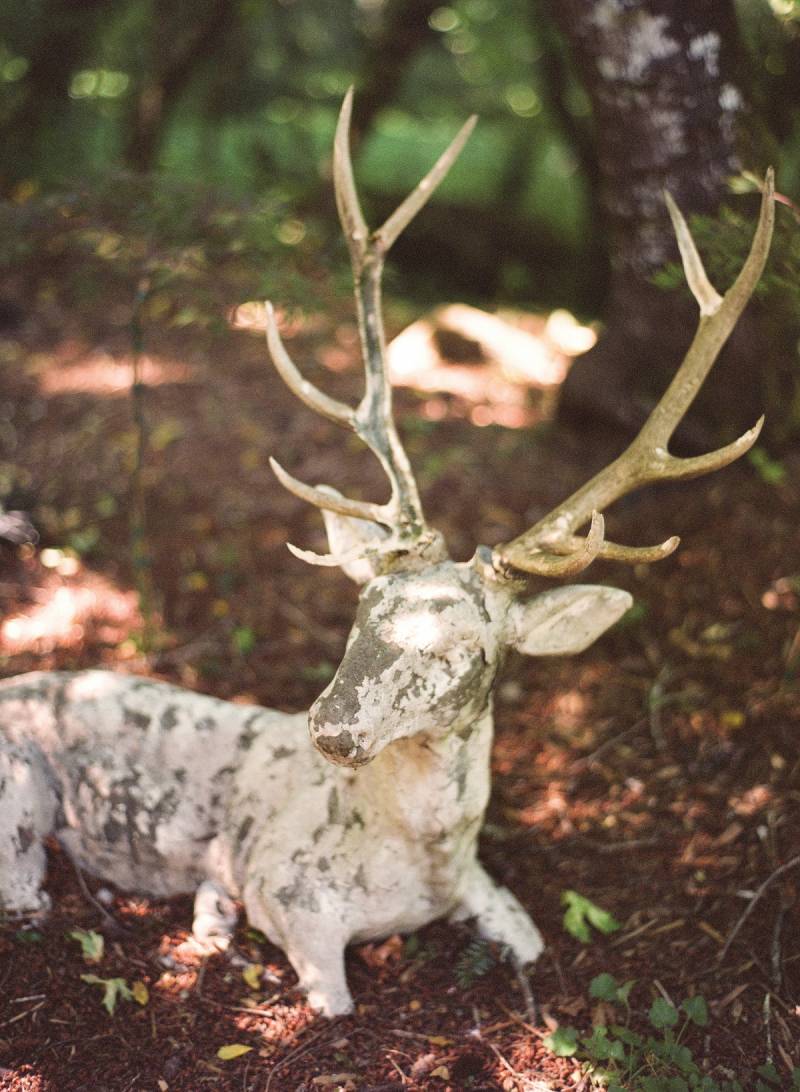 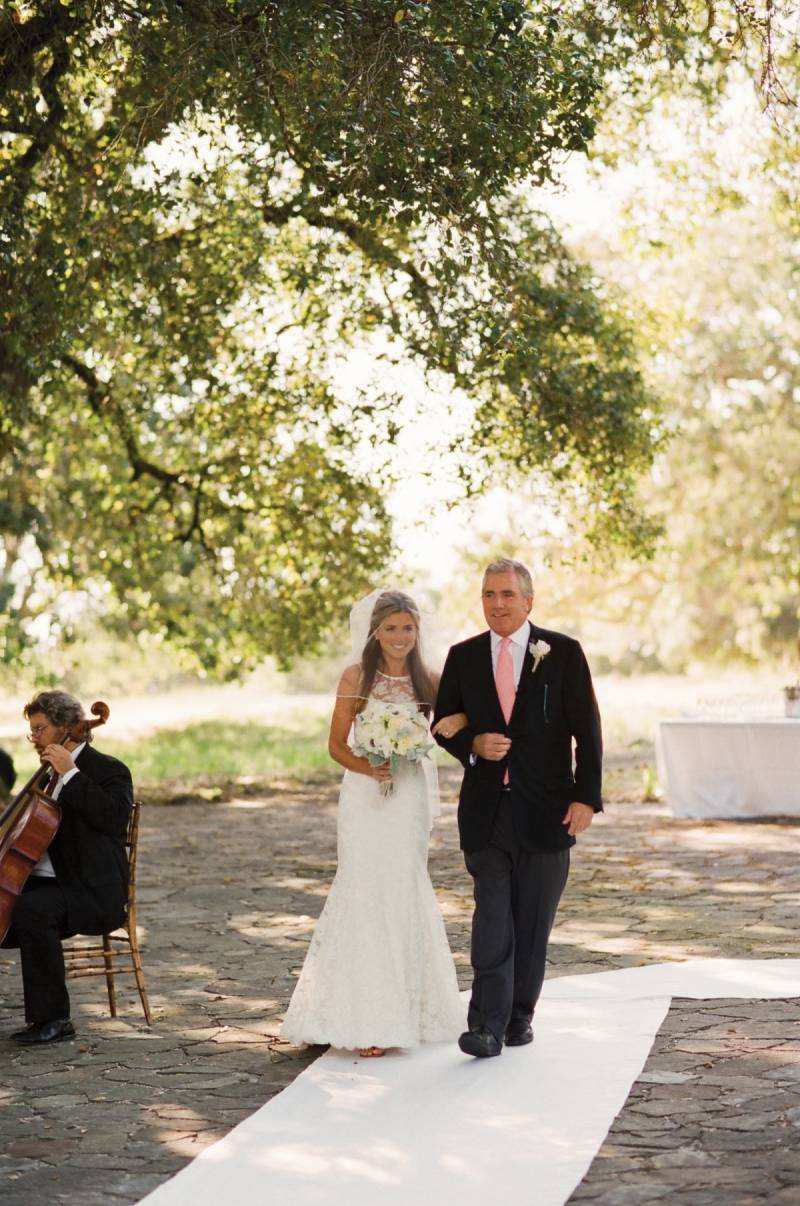 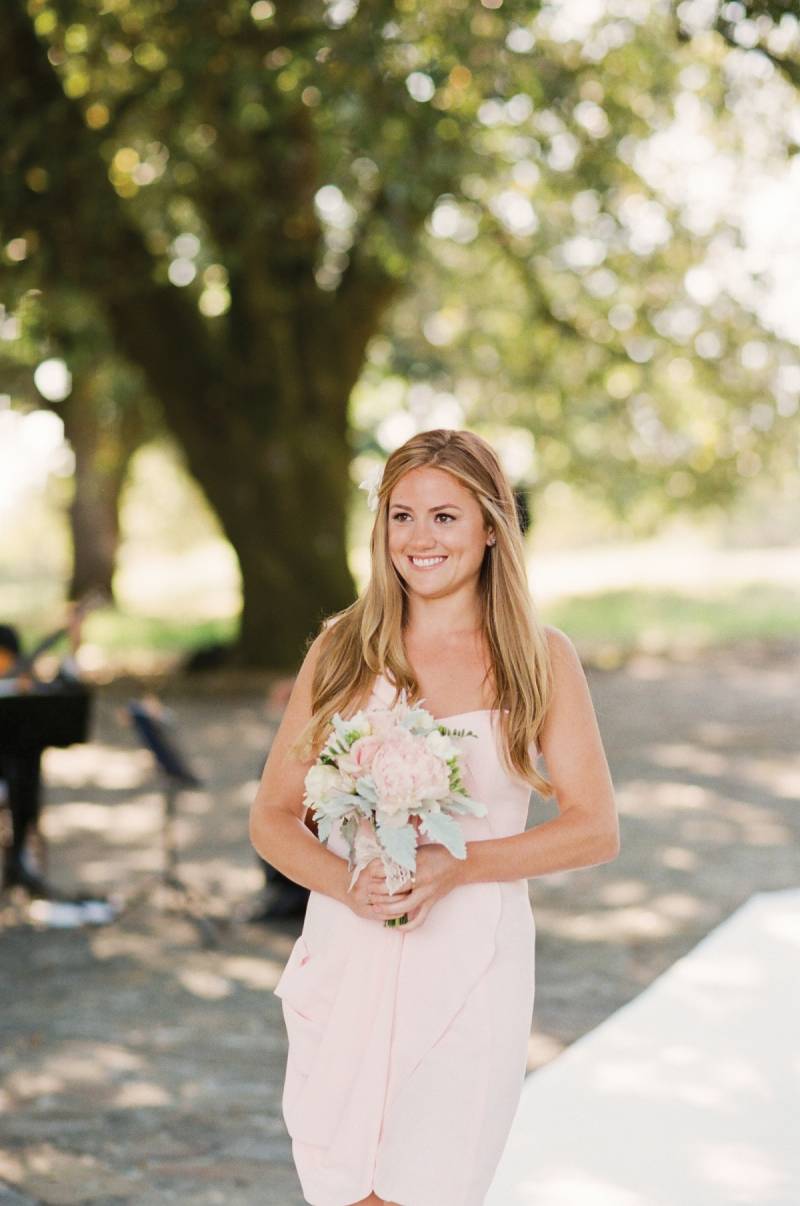 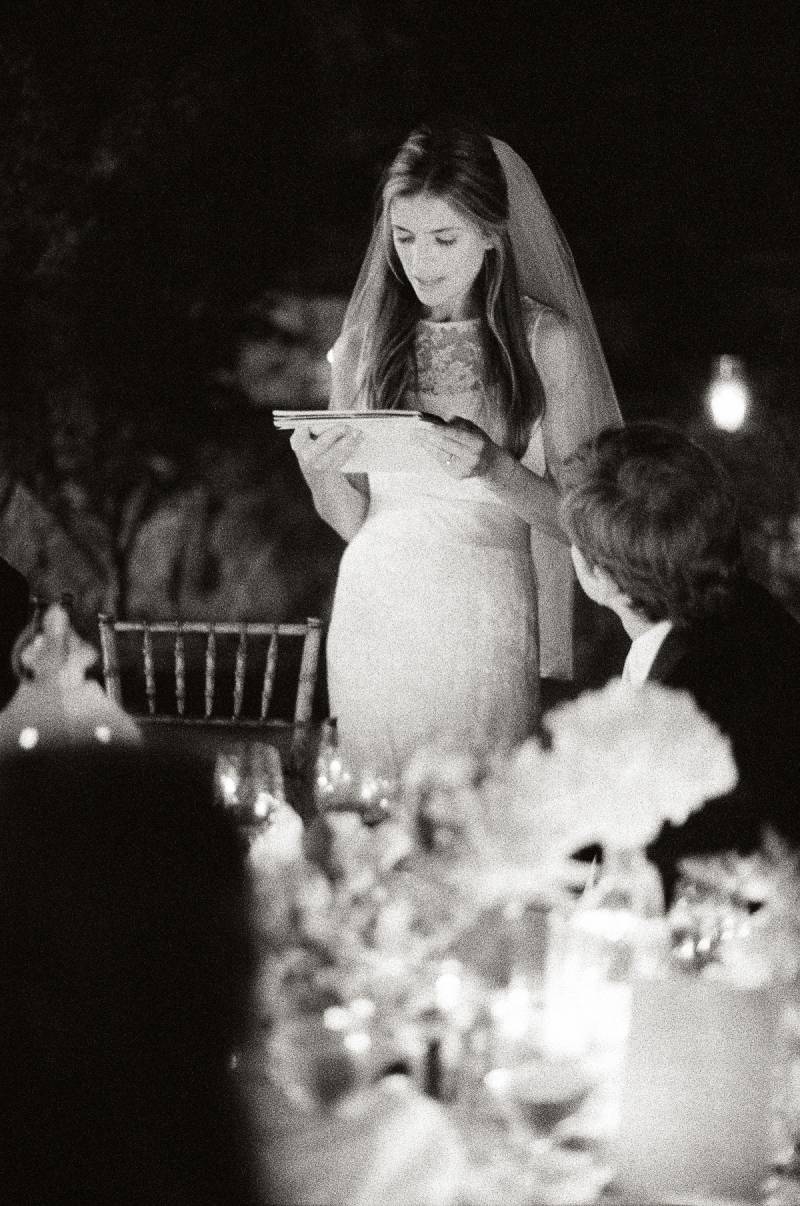 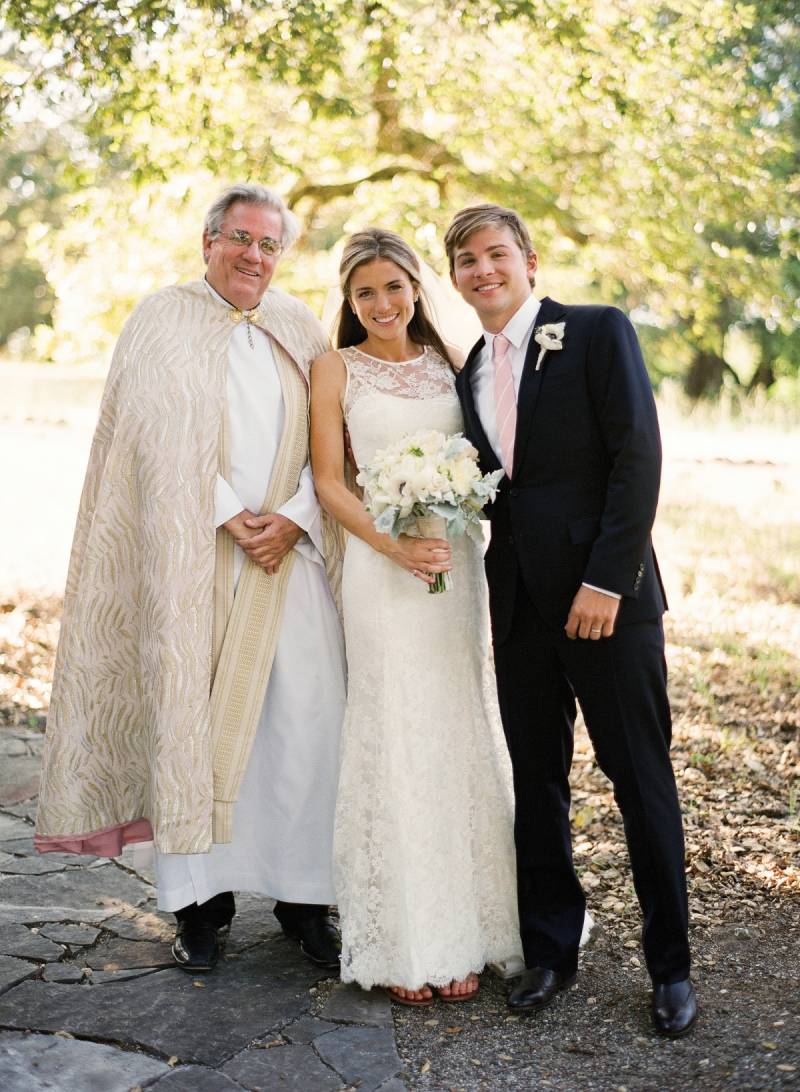 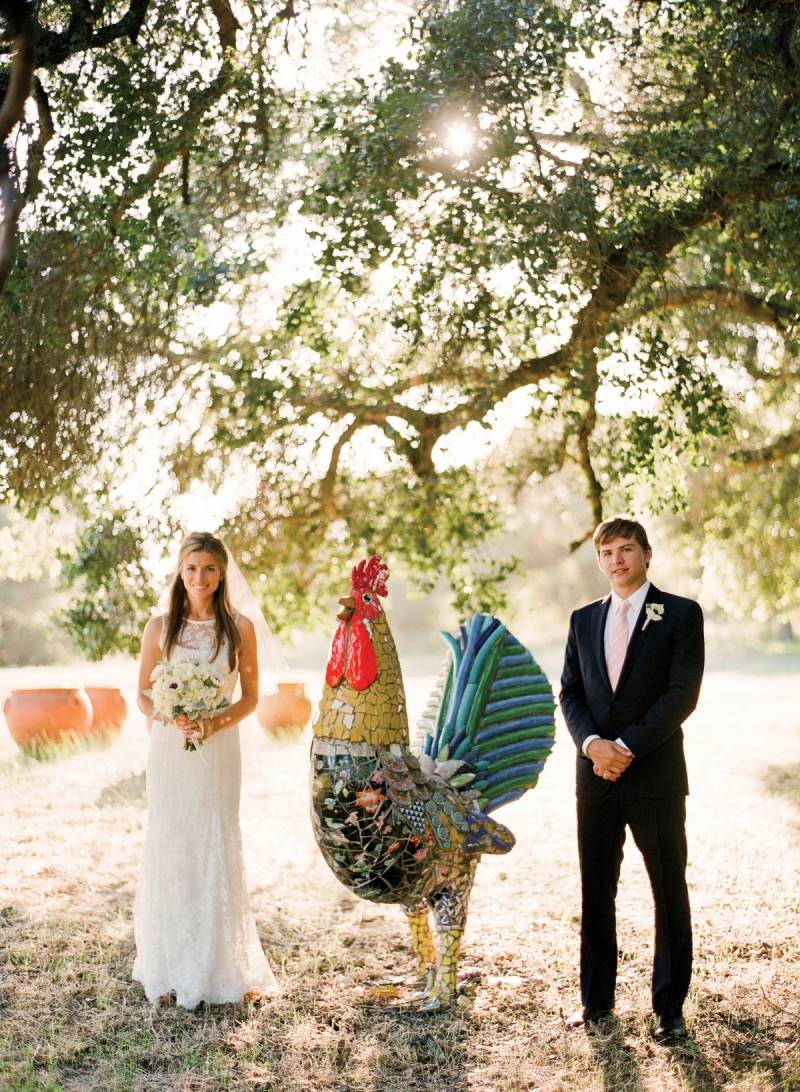 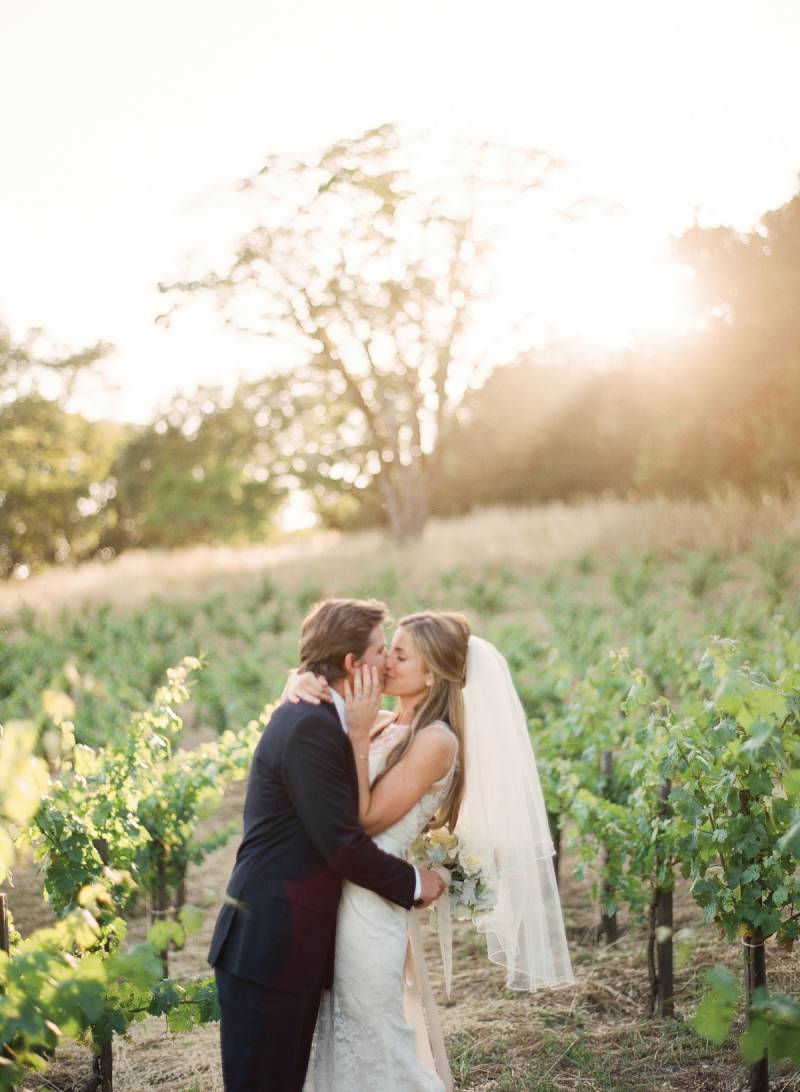